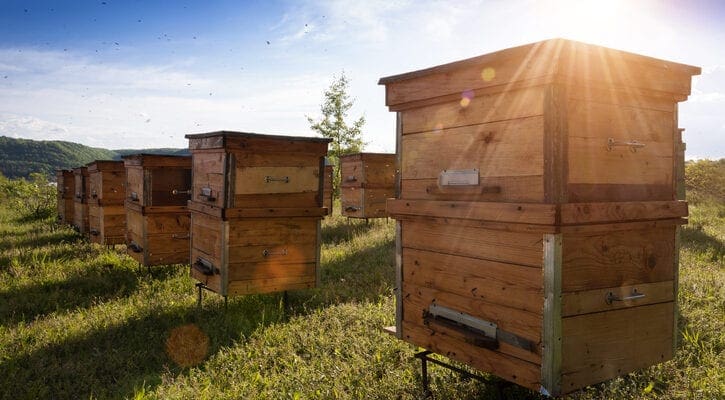 Ethical online florist Arena Flowers has looked at new UN data to discover which countries around the world have seen the largest increase in beehive populations, thanks to their beekeeping efforts. They’ve also provided some top tips that we can all use at home, to help save our bees.

Bees are vital to the survival of our ecosystem, as they pollinate our plants, flowers and 75% of our main food crops worldwide. It has been well documented that the number of wild bees has been on the decline in recent years, but which countries are creating a hive of activity with their beekeeping efforts?

Bee colonies are known to be rapidly decreasing, with a worrying 13 bee species going extinct in the UK since 1900, and a further 35 being added to the threatened species list. This threat became so large that in 2015 U.S. President Barack Obama launched the first ever national strategy to improve the health of honeybees and other key pollinators.

According to Greenpeace, humans are largely responsible for two of the most prominent causes of worldwide bee colony collapses – pesticides and habitat loss. Other factors causing the number of bees to die out include drought, genetic factors and air pollution – all of these are causes that we can try to reduce to help restore the number of bee colonies, particularly in countries with the highest declining populations.

So what can we do to help?

Here are Arena Flowers’ five top tips on what we can do in our own gardens, to help save the bees:

We all like to have a pristine garden, but cutting the grass less often gives bees and other pollinators shelter among the grass, and a place to feed. So consider giving your mower a break, and letting your grass grow that bit longer.

2. Plant a mix of bee-friendly seeds, plants and veg

One of the easiest ways to help the bees is to stop using bee-harming pesticides and herbicides. Look for the least toxic options you can find, and try and avoid highly toxic chemicals. Avoid spraying when plants are in full bloom and spray late in the day when bees are not flying.

Queen bumblebees seek out places to hibernate in the winter before emerging in the early spring to create a nest. Bumblebees love to make their homes in old teapots; bury the pot, with a few dry leaves in it, just below the surface with the spout sticking out above the ground and you will make a bumblebee queen very happy.

As a last resort, you can help revive a tired bee by feeding it a simple cocktail of white granulated sugar and water mixed on a teaspoon. Only help a bee if it has collapsed or is struggling, and please don’t leave the source of sugar water out for a long period of time – this is the equivalent of feeding the bees junk food and may tempt the bees away from the hive. Do not be tempted to offer honey as the honey may be imported and not suitable for British bees.

There is still hope for bee populations, with the research revealing that Uzbekistan is leading the way with their efforts in beekeeping, and has seen the biggest increase of beehives, growing from 120,00 recorded beehives in 2007, to 488,200 in 2017 (the latest available data) – a total increase of 307% over the last ten years. Bee farming and honey production has long been a source of income for those living in Uzbekistan, despite struggles with environmental changes over the past 50 years. According to a report by the United Nations Development Programme, the benefits of beekeeping span far beyond economic benefits. The development of beekeeping in the region positively impacts the environment too, through the widespread pollination of crops and vegetables, helping to improve the biodiversity of the country – a much needed relief after decades of environmental uncertainty.

With six of the countries with the largest increases in their bee populations over the last decade being located in Asia, it’s no wonder that the continent takes the title for the biggest increase in beehives over the past fifty years, having increased 296% since 1961. Mongolia (with an increase of 281%), Oman (increase of 184%), Tajikistan (having increased 172%), Azerbaijan (135%) and Myanmar (102%) are all based in the continent of Asia, and have all seen significant increases in the number of beehives, despite being located in one of the most natural disaster-prone areas of the world.

According to the data, the global bee-hive population has increased by over 50 million in the last 50 years, providing hope for numbers of bee colonies to increase once again, and continue to pollinate our crops and plants.

“It’s alarming to see how drastically life as we know it would change without the existence of bees. From the range of foods available, to the plants and greenery growing in the environments around us, our favourite spots which are currently rich in nature would look dramatically different.”

“It’s great to see countries around the world such as Uzbekistan getting involved in programmes that are helping to facilitate the protection of bees.”

“As a nation we need to make changes to prevent the decline of bees – even by making small practical changes such as using bee-friendly pesticides, planting more wildflowers in our gardens and trying to mow our lawns less often.”