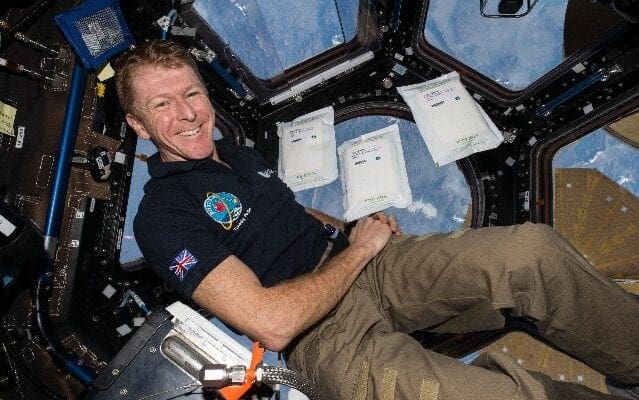 British ESA astronaut Tim Peake will send a special message from space to the hundreds of thousands of children who will be beginning the Royal Horticultural Society (RHS) Campaign for School Gardening and UK Space Agency experiment, Rocket Science, on the 18 April.

Tim will deliver his message from the International Space Station where he’s been since December. In the message he will wish the 600,000 young people signed up to the experiment luck with their investigations into the impact of micro-gravity and space travel on seed germination and growth. The results will help to form a clearer picture of the potential for astronauts to grow their own food to sustain them on long-term missions.

Speaking while 400km above the surface of the Earth, Tim said: “This is a really exciting time for the hundreds of thousands of young people across the country who will begin their Rocket Science experiments. I’d like to wish everyone taking part the best of luck with their investigations and I look forward to seeing some of the results.

“It’s possible that among those pupils taking part in the project are the young people who will help mankind reach the next big milestones in space exploration for the benefit of people on Earth. I hope the Royal Horticultural Society’s Rocket Science experiment will spark curiosity and wonder amongst young people who may become the next generation of horticultural scientists.”

With more than 8,500 schools and educational groups poised to begin their Rocket Science experiment from the 18 April, the project is now among the biggest mass science experiments conducted in UK schools.

Rocket Science will see school pupils across the country spend 35 days analysing the growth and development of two batches of seemingly identical rocket seeds. However, one batch of seeds has spent time in space with Tim on the International Space Station, orbiting the Earth at 17,000mph. The aim of the experiment is to enthuse young people about science and horticulture and provide the European Space Agency with key insights into some of the challenges of growing food in space.

“Tim has backed this project because by engaging with and enthusing young people he knows that among those taking part in the experiment there will be dozens who could help get an astronaut to Mars, hundreds who could build careers in the sciences and horticulture, and tens of thousands who will have a new appreciation of the natural world and the role plants play in all our lives.”

Children and young people of all ages (from early years right up to university level) and all abilities will take part in the initiative. Although registration for the experiment has now ended, you can out more about the experiment and the RHS Campaign for School Gardening on our website: https://schoolgardening.rhs.org.uk/Competitions/Rocket-Science-Experiment-Overview