There’s an exciting new date on the gardening calendar – Toby’s Garden Festivals have teamed up with Forde Abbey in Somerset to create a brand-new annual event, Toby’s Garden & Harvest Festival.

Running on 16th and 17th September 2017, Toby’s new festival is destined to be a practical celebration of Autumn gardening and the harvest, delivering all the horticultural delights that fans of the festival have come to expect, including quality West Country nurseries, celebrity speakers and practical demonstrations, along with delicious local food and entertainments in a picturesque location.

With so much to do at this productive time of year, the theme of the festival is ‘Autumn Harvest’, aiming to give gardeners a cornucopia of plants and information to bring back into their plots, including trees, shrubs, perennials and bulbs with lots of advice on what to do now. There will also be fantastic shopping with ample opportunity to stock up on beautiful, well-grown plants, from experts and purchase local crafts and gifts, perhaps even to make a start on that Christmas list!

Toby says, “I’m delighted to bring the GardenFest to Forde Abbey, not least because the gardens there are stunning in early autumn, with its aster-filled Herbaceous Border, beautiful trees and abundant Kitchen Garden which will make a spectacular backdrop.”

The setting for the Festival will be in and around Forde Abbey itself. Founded by Cistercian monks over 800 years ago, it became one of the wealthiest and most learned monasteries in

the country. After the dissolution in 1539, the Abbey lay empty for 100 years until in 1649 it was transformed into the magnificent house it is today. 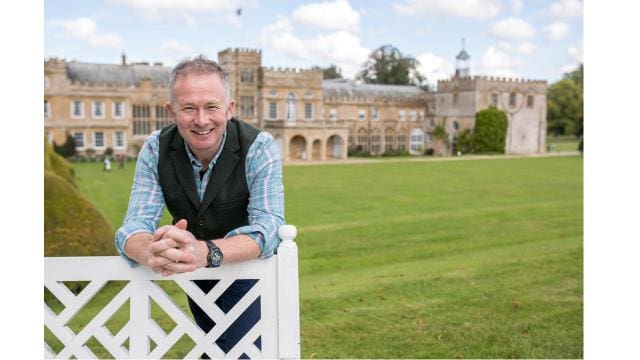 Set in thirty acres, Forde Abbey’s award-winning gardens make a fitting location for the Festival’s nursery exhibitors, boasting abundant herbaceous borders, a bog garden, arboretum, lakes and a working Kitchen Garden which will be the location for our practical demo’s. The Great Pond is monastic while the chain of ponds leading from it was laid out in the 1700s and is one of the earliest examples of landscape gardening.

Forde Abbey has been owned by the Kennard family since 1869 with current custodians Julian and Alice Kennard the sixth generation to live and work there.

Alice Kennard says, “”I’m very much looking forward to welcoming Toby and his team to Forde Abbey next September for an Autumn plant fair that celebrates the very best of what’s in season.”

The celebrity talks which run both days of the Festival will take place inside the historic building, located in the Great Hall, recently the setting for the Corn Exchange in Thomas Vinterberg’s 2015 adaptation of Thomas Hardy’s Far from the Madding Crowd starring Carey Mulligan. There will also be a secondary set of speakers based in adjacent Chapel.

Festival-goers will be treated to the sight of the UK’s highest powered water feature, Forde Abbey’s famous ‘Centenary Fountain’ which creates a spectacular 160ft plume visible for miles around when it’s turned on at intervals throughout the event.

Early birds can get discounted tickets at a rate of £10 instead of the usual gate fee of £12 by logging onto www.tobygardenfest.co.uk and buying online in advance, plus children under 16 go free. The group rate is £8.50 for 10 people and over.