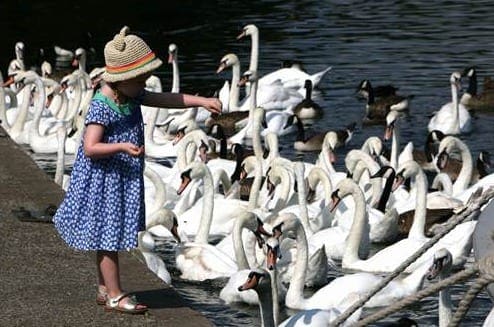 Lockdown leaves the UK’s ducks and swans at risk of starvation – here’s how you can help.

Without intervention, many animals are being left without the food they rely on. Ark Wildlife has donated five tons of feed to charities, and is asking the public to do their bit.

Why are duck and swan populations at risk?

As we have all seen, the coronavirus lockdown has impacted every aspect of life in the UK – but some of the consequences may be less obvious than others. An unintended side effect of people avoiding public spaces is that wildlife which usually relies on humans to feed it is being left to go hungry.

Natural food is limited on our inland waters, so ducks and swans which live on ponds and lakes normally rely on supplementary feeding by the general public. Many are now going hungry and some are at risk of starvation.

Mallard ducks and the three types of swan found in the UK – mute swan, Berwick’s swan and whooper swan – are currently listed under ‘Amber’ status in the RSPB’s list of Birds of Conservation Concern. However, the fact that isolation has caused such widespread disruption during the breeding season could mean that we see populations dwindling in future.

As a nation, we have long proved a reliable source of food for birds from our public parks to our private gardens. According to the British Trust for Ornithology, we spend between £200 and £300 million per year on bird food, and research shows that the number of bird species observed using garden feeders has risen from 18 to 130 since the 1980s.

What can the UK public do to help?

If you can safely visit your local waterside, please carry a few kitchen scraps or even some specialist duck food and scatter it on the bankside to give them a helping hand and maybe save a life.

Ducks and swans will enjoy a number of kitchen scraps so you don’t need to spend money to help. Good nutritional scraps include raw or cooked sweetcorn, peas, oats, cabbage, kale, lettuce and similar greens.

Even better, you can buy nutritionally balanced duck and swan food online and this will provide a balanced diet for all the birds, particularly young growing birds at this vital time of year.

What trusts and charities are doing to help

The UK garden wildlife products and supplies company Ark Wildlife is giving away tonnes of Ark Duck & Swan Floating Food to animal sanctuaries and waterfowl charities during the lockdown. The company operates an Ark Charity Partners scheme to support anyone that cares for wildlife or helps with protecting and creating habitats, and has already supplied The Wildlife Trusts, Wildfowl & Wetlands Trust and Wood Green Animal Shelter among others across the UK.

Sean McMenemy, wildlife expert and director at Ark Wildlife, says: “This lockdown has occurred during the breeding season and is the worst thing that could happen to our ducks and swans. They’d normally be able to rely on public feeding or donations to the charities to supplement their food. All these populations are suffering due to the lack of public access to parks, nature reserves and the like.

“The donation of five tonnes of food from Ark Wildlife made to animal sanctuaries and waterfowl charities throughout the UK will hopefully go some way towards making up for the lost contributions, with people rightly spending increased time in isolation indoors. We would, however, implore those who are able to get outside on their daily exercise to support the duck and swan wildlife in their local park.”

Can you feed bread to ducks?

Bread has been the traditional duck food for generations of park visitors, but modern white bread is not good for them. Although not harmful, it quickly bloats the birds without giving them the nutrition they need. A few scraps are fine, but balance it with better food choices and try to use seeded or wholegrain loaves rather than white bread wherever possible.

Where can people donate?

The Wildlife Trusts work hard across the UK looking after local nature reserves, and the Wildfowl & Wetlands Trust, the Canal & River Trust and the RSPB do terrific work in maintaining waterways for waterfowl across the UK. If you are unable to support the breeding populations of ducks and swans in your local park, donations to local and national charities such as those listed would go a long way to help.

For more info or to purchase Ark Wildlife’s products including duck and swan food visit: