A walk along any hedgerow in late summer and autumn will bring a tasty harvest of delicious blackberries from the brambles that weave their way through the undergrowth.

If you love the taste of these wild berries then you will love their cousins the boysenberry, dewberry, loganberry, sunberry, youngberry and many more.

These are all crosses between raspberries, blackberries and various rubus (blackberry family) relatives and have a flavour reminiscent of the tangy wild form, but with bigger fruit.

Some are more productive and tasty than others and also require more or less space depending on their natural vigour. The cultivation of all, however, is the same and very similar to raspberries.

Choose your variety carefully as some are very vigorous; the long canes, often well armed with sharp thorns, may reach up to 4.5m (15ft) in a season.

However, many modern varieties are more compact, some making a comparatively modest 1.8m (6ft) in a season, such as blackberries ‘Loch Ness’ and ‘Oregon Thornless’, which as its name suggests has smooth stems.

‘Helen’ and ‘Waldo’ are both reasonably compact, thornless varieties, while if you have more space and thick gloves, ‘Fantasia’ might be for you. There are many others, however, as a glance at the catalogue of any fruit specialist will prove.

Boysenberries are a little more vigorous, and the fruit resembles a long raspberry. It is popular for its flavour which is close to the wild blackberry.

Loganberries are perhaps the best-known of the hybrids and are a cross between raspberries and blackberries. The taste is sharp, so many gardeners prefer to use them for cooking rather than eating raw. Thornless hybrids are available.

Blackberries like similar conditions to their cousins the raspberries. Well-drained but moisture-retentive soil is essential for good results although these tough plants will produce at least some fruit even if given only a bare minimum of attention.

Choose a site in sun or semi shade and make sure that there are adequate supports in place to tie the strong, vigorous canes to. The traditional way, as with raspberries, is to use strong wires, about 45cm (18in) apart, stretched between vine eyes.

Any strong support will do and, in fact, both blackberries and raspberries can be used as an effective screen in the summer to shelter other crops, or even as an attractive barrier between veg plot and ornamental garden.

Your plants could well be in situ for 10-15 years so it is worth taking time over soil preparation. Remove weeds, especially deep-rooted perennials, and dig in plenty of well rotted organic matter prior to planting.

Be sure to add lots more around the roots each year in spring after applying a dressing of general fertiliser. Plants need plenty of space to grow as diseases can be encouraged by overcrowding.

Look at the suggested spread of the variety chosen and use this as a guide to planting. So if a plant is likely to grow 1.8m (6ft) in a season, this is the distance that your plants should be spaced in the row.

There are lots of ways to train the canes and the method chosen depends largely on how vigorous the variety is. In the case of very fastgrowing types, the canes can literally be woven around the wires so that they take up less space.

Tie in the canes regularly to prevent them degenerating into a tangled mess or from becoming damaged. Once the fruit has been picked the old growth is removed completely at ground level, leaving the new growth to fruit next year.

Some varieties produce too many canes and the excess can be removed to improve the quality of the crop on the remaining canes. Aim to leave 20-25 canes on each plant depending on vigour, removing the rest in May or June.

Birds love the fruit of blackberries and hybrid berries and netting and various other deterrents can be used to keep them at bay. However, cropping is usually so heavy at a time when there are plenty of other things for them to eat that this is seldom necessary.

Water well during the growing season, especially as the berries are swelling, to maintain their size and the general health of the canes. Top up the mulch around the roots if the weather is very dry in summer. 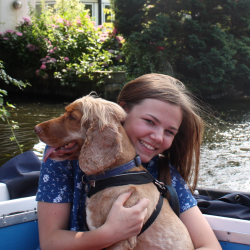