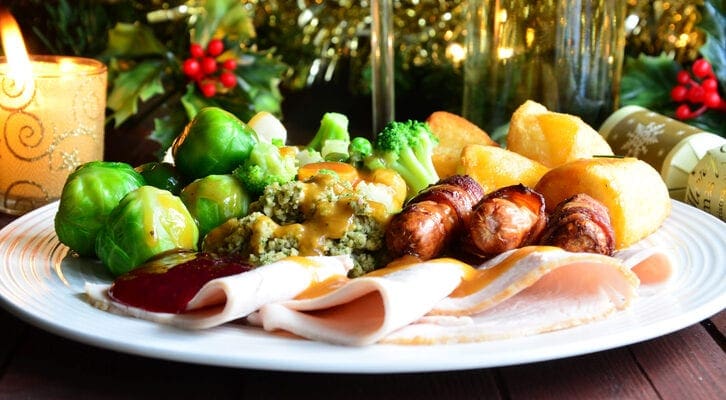 No one wants a poorly tum over Christmas, so here are five top tips from the University of Surrey to help you keep those pesky bugs at bay!

After opening Christmas presents, what do you most look forward to on Christmas Day? For the vast majority of people it is their Christmas dinner. Thoughts centre on turkey, pigs in blankets and roast potatoes, but for the unfortunate few, common mistakes in cooking Christmas dinner can lead to food poisoning putting a dampener on celebrations.

Dr Jorge Gutierrez, lecturer in food microbiology at the University of Surrey, said: “Cooking Christmas dinner is stressful; not only is the designated chef cooking for more people than normal, they also have multiple courses and dishes to juggle.

“Unfortunately it can be when simple mistakes happen, which can lead to food poisoning. The effects may not be seen immediately but when dangerous bacteria are ingested the symptoms are enough to ruin anybody’s Christmas and new year festivities.”

Professor Anita Eves, from the University of Surrey, said: “Many people view themselves as an accomplished cook and take on all cooking responsibilities for Christmas Day. But this is a bigger meal than many cook normally and often for more people. If hygiene rules are not followed they are exposing their guests to a higher risk of food poisoning which can have disastrous consequences.”

Here are a few commonsense suggestions on how to avoid food poisoning this Christmas.

Cross contamination is one of the main causes of food poisoning this holiday season. Nasty bacteria such as Campylobacter found in raw poultry, Escherichia coli in raw beef and Salmonella in raw pork and poultry could put a swift end to festivities if not controlled properly and contact is made with cooked or ready-to-eat foods and fresh produce.

If you are unlucky enough to come into contact with these bacteria the side effects are not pretty with common symptoms including diarrhoea, nausea and vomiting.

Dr Gutierrez said: “When preparing a large meal for a number of people it is easy to get distracted and use the same knife and chopping board you were using to prepare raw meat for your vegetables or other foods. Such an innocent mistake could be disastrous for your guests and cause unnecessary discomfort over the holiday season.

“If you have gone for the frozen turkey option be careful when defrosting. Although it may take longer to do, only defrost in the fridge, and make sure the bird is totally defrosted. Cooking a turkey that is not defrosted fully has previously resulted in bacteria surviving the cooking process, and causing illness.”

Forgot to turn the oven on or not left enough time to cook your turkey? It is tempting to turn the oven up to maximum temperature to get your meat cooked in time. However this could prove both embarrassing and dangerous when cutting into the turkey only to find the inside raw. If this is accidently consumed symptoms include extreme vomiting and diarrhoea.

Dr Gutierrez said: “At the risk of sounding like a cliché, preparation is key when planning your Christmas dinner. Cooking food at a lower temperature and for a longer period will ensure that it is cooked thoroughly.

“This applies to reheating food in the microwave after Christmas Day – make sure it is piping hot throughout before consuming. To reheat gravy, warm it for two minutes and stir thoroughly before continuing for another two minutes. This ensures that heat is distributed evenly.”

Professor Eves said: “It is important that you check that the turkey is cooked through before serving. It may look cooked on the outside, but the inside may still be raw. Using a meat thermometer and checking the juices of the turkey are running clear (by testing in the thickest parts of the bird) will help avoid this.”

3) Put leftovers in the fridge

Once Christmas dinner is finished, it is tempting to put your feet up in front of the TV and enjoy the latest drama in Albert Square or Coronation Street, leaving the leftovers sitting out overnight. However once cooled it is important to put all leftovers in the fridge as naturally occurring bacteria in the atmosphere can cause contamination. Eating leftovers that have been left at room temperature for a long time has been implicated in a number of cases of food poisoning.

For instance, turkey gravy is susceptible to contamination; poor temperature control helps the bacteria Clostridium perfringens grow, which can cause vomiting, diarrhoea and stomach cramps. Often mistaken for a 24-hour bug, symptoms of this type of food poisoning typically appear within the first 24 hours after consumption and can put a halt on Christmas festivities.

Dr Gutierrez said: “Rapid increases and decreases in food temperatures creates a breeding ground for Clostridium perfringens. Make sure that you put food in the fridge as soon as it has cooled to reduce the risk of bacteria growing.”

Got a difficult house guest who has requested the only item you forgot from your shopping list? It is easy to reach into the back of the cupboard and pull out an old tin of squirty cream or that Camembert or smoked salmon in the fridge from last weekend. However, this could be disastrous for your guests. Out-of-date soft cheeses can cause flu-like symptoms due to Listeria monocytogenes, which can grow at refrigeration temperatures and can be very serious to pregnant women and the elderly.

Dr Gutierrez said: “There are a lot of confusing messages about sell-by and use-by dates. Use by dates relate to risk of illness, and so should be observed, best before dates mean only that the food may not taste as good, but they should not make you ill. Any product that contains raw meat, fish, eggs or dairy products should be consumed within the recommended time.”

5) Be careful of pre-washed or pre-cut vegetables

After the presents have been unwrapped and the Bucks Fizz finished, time is of the essence to prepare Christmas dinner. Pre-washed or pre-cut vegetables from supermarkets can save valuable time in cooking the main meal of the day, but it is important to remember that the more food is handled and processed, the more likely it is to attract bacteria.

Dr Gutierrez said: “People assume that what comes out of a packet is clean, and in the majority of cases this is true (especially if labelled ‘ready to eat’), but the more food is handled the more likely it is to contain dangerous bacteria. It is important to thoroughly re-wash all vegetables and salads that will be eaten raw.”